Private Equity
The Private Equity sector saw record numbers. Around 275 funds raised close to $180bn in Q1 alone. This is the largest fundraise in this time period since the Global Financial Crisis and 10% up on 2020. Globally, North America once again represents the largest single geography but in Europe $20bn was raised (compared to $5bn last year) and Asia saw a 65% increase. Interestingly, KKR's Asian Fund IV raised c$15bn which is not only the largest fund ever raised in the region, but also the firm's largest ever fund. 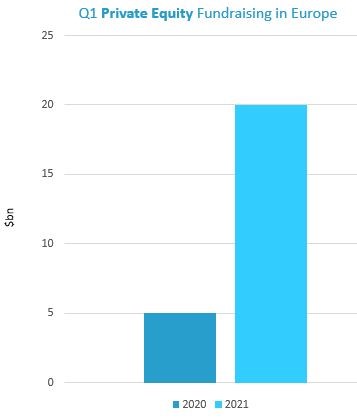 So in the PE space, it would appear that lockdown has not diminished the appetite of LPs to invest in this category and that the virtual nature of the fundraising has worked really well. An interesting dynamic, though, appears to be that LPs have been sticking to their most trusted relationships. The market appears expensive, if not overvalued, and so LPs may well have wanted to turn to investors who have demonstrated success in these markets as well as those who have been through market cycles.

Whilst we have seen a number of new Funds set up, where they have seen success has been in the context of deep sector specialisms, often in sectors with strong pandemic resonance - growth areas such as healthcare or technology. Avoiding the need for major fundraising, some first time managers have decided to work with a small group of investors on a deal by deal basis as a means to build track record.

Private Debt
The Private Debt space, by comparison, has been much quieter. Q1 of 2021 was very similar to 2020 – 39 funds raised compared to 41 last year. Indeed, fundraising numbers have been rather flat since the glut in 2017. In addition, we are seeing a strong trend towards an average fund size of over $1bn which compares to $718m in 2020. This huge leap reflects LP appetite to concentrate their funds in a smaller number of larger managers. Private Debt investing can benefit from scale and of course it is quite resource intensive to manage loans on a day to day basis.

Equally, there is a growing SMA element to the market that is not reflected in fundraising numbers. Large Pension Funds and Insurance Companies want greater yield and so have been allocating away from public market fixed income investments to private debt funds often through a Separately Managed Accounts structure.

For more information, or a general market update, please do get in touch.